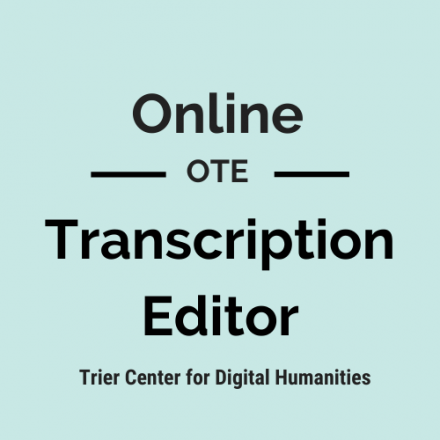 Website of the Project: Online transkription editor (OTE) on Sourceforge

Working in larger edition projects of historical texts consists of several steps. These are usually modular and build on each other, i.e. the result of one step is the starting point for the next step. In addition, the processors often use the four-eyes principle, but rarely sit in the same place.

For the step of transcribing New Testament texts, which follows the inventory, an online transcription editor (OTE) by Yu Gan together with Martin Sievers based on TinyMCE was developed as part of the “Workspace for Collaborative Editing” project. This was integrated into the established research environments. These are on the one hand the “New Testament Virtual Manuscript Room” (NTVMR) at the “Institute for New Testament Research” (INTF) in Münster and the offers of the project “The International Greek New Testament Project” (IGNTP) at the “Institute for Textual Scholarship and Electronic Editing" (ITSEE).

From a technical point of view, the HTML representation of the transcriptions including annotations for the graphic display in the browser is transferred to a TEI-compliant XML structure when saved and stored in a database. Conversely, when a transcription is called, a conversion from XML to HTML takes place.

Other employees can then comment in the higher-level research environment and make suggestions for unclear passages. In addition, the web-based approach also allows interested and qualified laypeople to participate in the context of “crowdsourcing”. At the end of the day, a final version is released for further collation through appropriate rights management.

The open-source tool OTE has been used since September 2016 as part of the ERC project “Multimedia Yasna” (MUYA) for the transcription of religious texts from the Avesta, the most important source of Zoroastrianism. For this purpose, some adjustments have been made in order to take into account the special requirements of the multilingual texts, among other things.