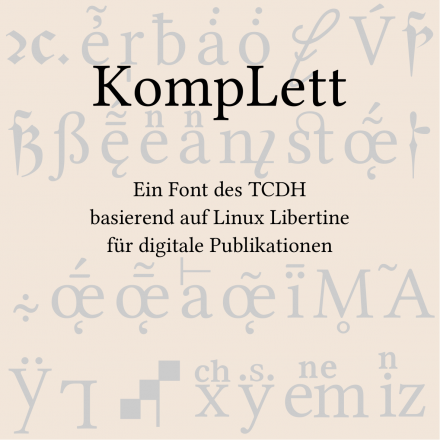 When working with (historical) dictionaries, the problem often arises that some characters are not included in the Unicode standard. This means that these characters cannot be represented with "normal" fonts. Examples of this are old currency symbols, musical note symbols, but also many diacritical marks that add one or more accent marks to the base letters.

In order to be able to display all these characters in print and online publications, the TCDH-Team (Martin Sievers und Peter Hinkelmanns) developed its own font based on the open source font "Linux Libertine". The required characters were inserted into the “Private Use Area” (PUA) as “precomposed characters”. The PUA is the area that is not pre-assigned by the Unicode standard.

The resulting font was revised and restructured in 2014. Since then, it has been used under the name “KompLett” (made up of “Competence Center” and “Letter”) in particular for the dictionary network.

Along with the restructuring, plans were also made for a complete redesign of the font. The background to this is the further developments in the font sector in recent years. In addition, the original font is no longer maintained. It has merged into a new open source font "Libertinus" (so-called Fork), which provides a much better basis.

Libertinus is designed as a modern open-type font and thus supports, among other things, the use of historical letter shapes, but above all the composition of diacritical marks. Since OpenType fonts are supported by all modern browsers and typesetting or word processing programs, they are now the first choice for a new font.

Based on Libertinus, only those characters that cannot be generated by composing existing characters should be entered in the PUA as before. The current version of the Unicode standard as well as suggestions for the integration of historical characters, such as those summarized by the Medieval Unicode Font Initiative (MUFI), should also be taken into account.