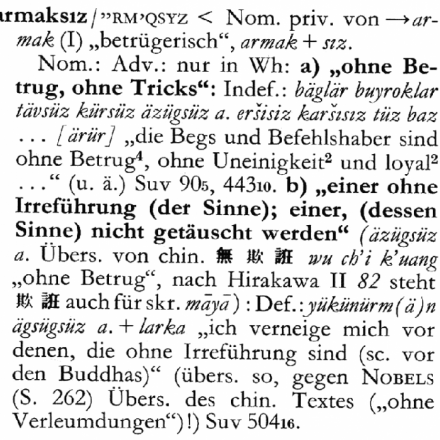 The "Dictionary of Old Uighur" is intended to capture the traditional vocabulary of the Old Uighur text material in a digital and printed form, reproduce it in German and Turkish translation, present the evidence in their contexts and analyze phonetic and grammatical structures (phonetics, morphology, syntax, etc.) as well as the various channels from the donor languages that ​​provide information on the language and culture(s) of the ancient Uyghurs.

From the 8th to the 14th century, the Uighurs established a high culture in Mongolia and along the Silk Road as the first Turkic people whose texts are the oldest surviving Turkish texts, which are therefore fundamental for research into all Turkish languages. In terms of its meaning, Old Uighur or Old Turkish is therefore comparable to that of Latin in the Romance languages.

The lack of an up-to-date dictionary of Old Uighur / Old Turkish has long been complained of by Turkology, but also by neighboring sciences such as Indology, Mongolian Studies, Sinology or religious studies. The Turkic people of today's Uighurs are not in a position to develop such a basic work themselves, mainly due to the radical Sinization policy of the Chinese government.

In a first step, the "Uigurische Wörterbuch" (Uighur Dictionary) published in 2010 by Prof. Dr. Röhrborn was retro-digitized, corrected, updated, transferred to a lexicographical database and fed into the Trier Dictionary Network as a test. The Uighur Dictionary lists and makes the language material of the pre-Islamic Turkish texts accessible (religious texts of the old Turkish Manichaeans and Buddhists, medical and calendar texts, lottery books, documents etc.) from the period between the 8th and 17th centuries. After this digitalization, the basis for the continuation of this work in the form of the long-term academy project "Dictionary of Old Uighur" was created.

On this basis, the Trier Center for Digital Humanities took over the development of the technical infrastructure in the first three years of the academy project. This included in particular the development of an article creation system based on the XML editor oXygen (realised by Martin Sievers) as well as the design of interfaces for printing, online presentation and long-term archiving. This enabled a modern single source publishing process.