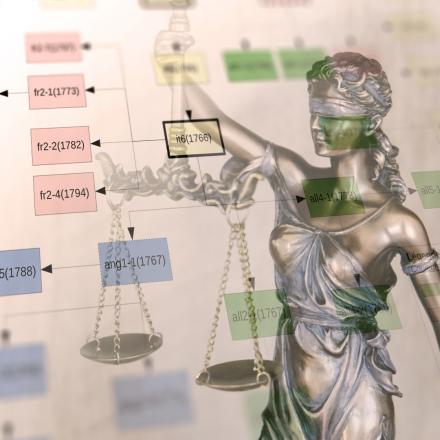 A comprehensive documentation of the vocabulary of historical legal languages in Europe exists at best in rudimentary form. The aim of the Franco-German MetaLEX project is to close this research gap by establishing a source-based, dynamic and interdisciplinary metalexicographic information system on historical legal languages in Europe. The project is based on three types of sources and initially focuses on the period between 1700 and 1900. The resulting information system is designed generically and is intended to cover a larger period in a follow-up project and potentially accommodate an unlimited number of sources.

MetaLEX is to be understood as a historical conceptual information system of European legal languages that does not offer dictionary articles in the “traditional” sense, but rather maps historical word concepts in their temporal development by making use of research and visualization methods as well as analysis procedures of the digital humanities and the computer science. MetaLEX will thus generate a multilingual concept-oriented information system, a dynamic and networked metalexicographic repository of knowledge for the indexing of historical legal languages in Europe in the period from 1700 to 1900. MetaLEX is historically and philologically anchored, but in the long term and in the full development stage, it is also intended to be a best practice example for the processing and reflection of current legal multilingualism in Europe.

Currently, the concept is being tested on the basis of the sub-project “Cesare Beccaria, Dei delitti e delle pene  (1764) and its 18th Century Translations: Networks, Multilingual Edition and Metalexicographic Approaches”.

Furthermore, annual workshops on the project are being held at Villa Vigoni/German Italian Centre for the European Dialogue since 2018.

A new publication on “MetaLEX” has been released