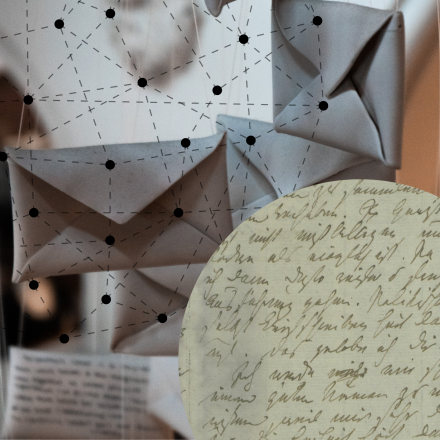 Deicke, A. 2021 (im Druck). „Modelling as a Scholarly Process. The Impact of Modelling Decisions on Data-Driven Research Practices“. In Proceedings of Graph Technologies in the Humanities 2019 and 2020, hrsg. von T. Andrews/F. Diehr/A. Kuczera/F. van Zundert/Th. Efers.

The Jena (and Berlin) Early Romantic period is considered to be the outstanding intellectual revolution of young German authors and scholars on the threshold of the epoch around 1800. While the group, which was as effective and sustainable as it was dispersed and at the same time network-building, theoretically reflected and practiced both "sociability" and the form of communication "letter," the correspondence of the actors is partly incomplete, but overall in uneven quality and largely only available in print. A (also quantitative) indexing of the letters is one of the greatest desiderata of Romantic studies.

The project aims to systematically and completely record epistolary communication processes and in particular the epistolary knowledge transfer of the 'Romantics' among each other and with their other correspondence partners between 1790 and 1802 for the first time, to publish them digitally and to evaluate them from a literary-scientific and network-theoretical point of view through the interaction of editing (with a high proportion of annotation), graph technologies, historical network research and Romanticism research. In the context of a terrain that has already been well researched in the history of ideas and social history ("early Romanticism"), this will not only reconstruct and make accessible the tradition of a form of communication that largely determined contemporary everyday life, but will also open up a new paradigm for the study of letters and expand scholarly reflection on the theory and social practice of "sociability" in early Romanticism and on the role and function of the letter in this context. To this end, the project intends to make the correspondence of central actors and "marginal figures" of the early Romantic period digitally accessible and reusable in a philologically reliable manner in open access, to increase the technical and scientific degree of indexing (full texts, standardized meta- and register data including communication pragmatic elements), and thus to stimulate quantitative and qualitative research on letters from a joint perspective of digital humanities (graph technologies, network research, semantic similarity analysis) and literary studies, as well as to set it in motion itself. Group formation and dynamics, as well as the associated transfer of knowledge, will thus be systematically explored for the first time on the basis of the letters (especially their meta- and register data) and examined with network-theoretical methods that open up and further develop approaches from sociological, historical, and literary network research for the analysis of these correspondences. The starting point for the project is the data already available in the Digital Edition of the Correspondence of August Wilhelm Schlegel (KAWS).