The “Trier Benedictine Abbey of St. Matthias” was one of the most important educational and cultural institutions in the heart of Europe in the Middle Ages. Precious manuscripts from eight centuries provide impressive evidence to this day. The virtual reconstruction of the library makes the medieval manuscripts accessible to research and to the general public.

As part of a DFG-funded project, together with the “Scientific Library of the City of Trier”, the “Trier Episcopal Seminary” and the “Technical University of Darmstadt”, we have brought together the holdings of the St. Matthias Monastery Library (now spread across 25 locations worldwide) in the “Virtual Scriptorium St Matthias”. The manuscripts, digitized and indexed according to international standards, allow comprehensive access to the entire reconstructed holdings of this important medieval library and its intellectual profile as an important educational center. At the same time, links with extensive additional information enable differentiated access to the indexed material and, thus, form the basis for detailed research projects in the fields of philology, manuscript history, palaeography, art history, theology or legal history, for example.

The BMBF-funded project “eCodicology” built on this digitized material and, in particular, focused on the formal and technical layout of medieval manuscripts. With the help of automated processes, for example, individual format-bound elements of manuscript pages were automatically recognized and processed algorithmically according to this. Quantitative evaluations made it possible to answer questions about scribe assignments, writing schools, references to manuscripts, provenances and so on and, thus, making it easier to assign fragments. The project was presented in an exhibition in the library of the Episcopal Seminary in Trier in 2015. The TU Darmstadt (lead), the TCDH, the Karlsruhe Institute of Technology (KIT) and the scientific library of the city of Trier were involved in the project. 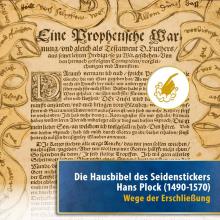 Digitalization of the Plock Bible 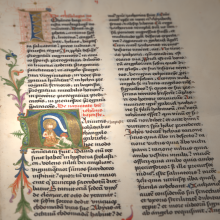 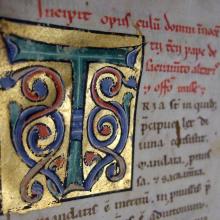