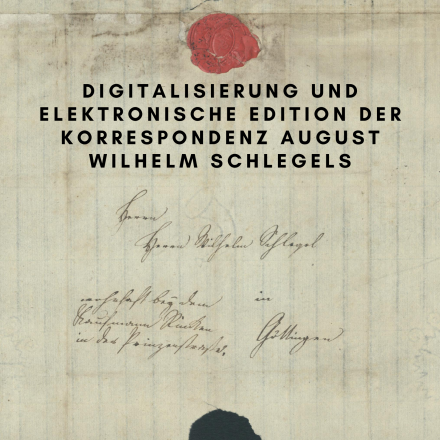 August Wilhelm Schlegel (1767-1845) is both the most versatile and the most underrated among the authors of German-speaking Romanticism. Despite his immense influence as a translator, writer, critic and scholar, his work has been poorly understood and comparatively little researched until recently. To this day, the reader is dependent on an incomplete edition of the work, which Schlegel's companion Eduard Böcking edited posthumously in 1846ff. There are also serious gaps in the area of ​​letter editing, which mostly only consists of individual correspondence. The aim of the letter edition is to provide research with a reliable and globally usable material base. It aims to index, digitize and edit all letters from and to Schlegel in Dresden and elsewhere.

As part of the project, the letters that were printed in over 100 publications from the 19th and 20th centuries, as well as the entire handwritten legacy of letters (letters from and to AW Schlegel) are to be brought together in a digital edition, facsimile, transcribed and made searchable in full text . For this purpose, digital images of the letters previously printed (approx. 2,500) and the letter autographs (3,646) were made at the SLUB Dresden and initially made available as a digital collection via the local catalog system. The corpus was completed by the letters from external institutions (approx. 1,260), which were directly integrated into FuD. The technical implementation of the edition - which includes the transcription, the biobibliographical indexing, the text marking of the content of the full texts as well as the creation of the register - then took place at the University of Marburg.

The TCDH Team is responsible for the Technical Development, the Interface Programming and the UX Design

The TCDH team is responsible for the technical development, the interface programming and the UX design. The TCDH team contributed its expertise to various areas of the project: In cooperation with a Chinese service provider, the letters that had already been printed were generated in Fraktur full texts, while the full texts of the Antiqua prints were included in the edition using an OCR process . The training of the Marburg employees in the area of ​​XML and TEI as well as the assistance with the operation of the edition software also fell within the competence of the competence center. The main task, however, was the provision of the technical infrastructure for working on the edition. The main focus was on interface programming, which enables the exchange with established software systems (such as the DFG viewer) and the catalog system of the SLUB Dresden and the ULB Bonn. The images of the printed letters, the facsimile autographs and other data can be imported into the FuD work environment via this interface and further processed here in the course of the editing process (standardization, assignment, content indexing). In addition, FuD provides support with the acquisition of the letter metadata, the creation of the handwriting transcriptions and the multi-part index as well as the networking of the individual letters to form correspondence chains, thus preparing the electronic online publication. The graphical user interface was also developed at the Trier competence center.

Thanks to the continuous data maintenance via the interactive tools provided by FuD, users of international special branches of science have been able to access the 'work in progress' and thus the editorial database since 2014. The complete edition of August Wilhelm Schlegel's correspondence will go online at the end of 2021 and will then also be completely available for follow-up research from a wide variety of scientific fields.