A Tool for Synchronous Text Comparison 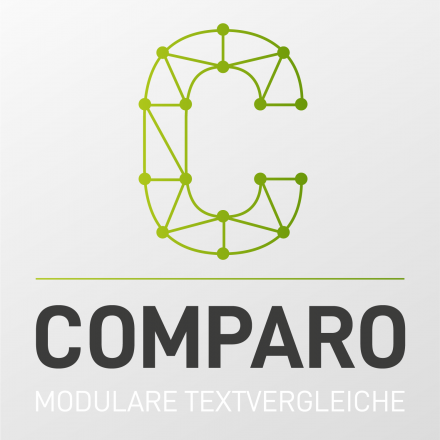 Comparo is a tool for synchronously comparing an almost unlimited number of versions of a text. The comparison unit is the 'sentence'. Since all versions of a text are compared with each other in a previously defined order at the same time, Comparo is a very clear tool that can be used for collation in a time-efficient manner. The comparison parameters can also be comprehensively configured by the user so that they can be individually tailored to the respective text type and readjusted if necessary in order to optimize the comparison result (for example, individual 'high-frequency' words can be defined to be explicitly excluded from the comparison). Following the suggestion that is automatically generated on the basis of the default settings, the user can manually modify, add or remove each assignment. Features such as 'Bookmark', 'Comment', 'Search', 'Mark as done' as well as various evaluation options in clear list form (e.g. display of all unconnected elements) also increase usability.

Comparo was developed by the TCDH as part of the binational research project “Arthur Schnitzler digital. Digitale historisch-kritische Edition (Werke 1905–1931)“ and is used there to create a 'microgenesis' view, which arranges all text-genetically relevant documents of a work by Arthur Schnitzler in a single view in the order in which they were created and parallels the corresponding sentences in different versions with the connections which have been stored via Comparo. This way, a highly complex and yet clear view of all changes that the text has undergone in the course of its creation is created and thus not only answers exciting questions from a philological point of view, such as:

The information generated in Comparo is stored in an FuD database. With the help of this database it is possible to work out a detailed presentation in the form of a web view. In the website created for the project 'Arthur Schnitzler digital' , further settings can be made in order to adapt the view to the respective needs or preferences of the user, for example the connecting lines between the versions or the internal variances can be hidden as required. In addition, thanks to the data stored in Comparo, the user can choose which of the documents he would like to compare with one another and in this way put together an individual setting based on versions relevant to his research interests.

Comparo is a tool developed in the Java programming language, which is used as a Java archive (JAR) regardless of the platform. Fundamental for the application is the availability of an FuD database, which provides the text versions to be compared and is used at the same time to save the compiled comparison results.

Online Availability of the Digital Edition of "The Comedy of Seduction" by Arthur Schnitzler in Version Beta 2.1