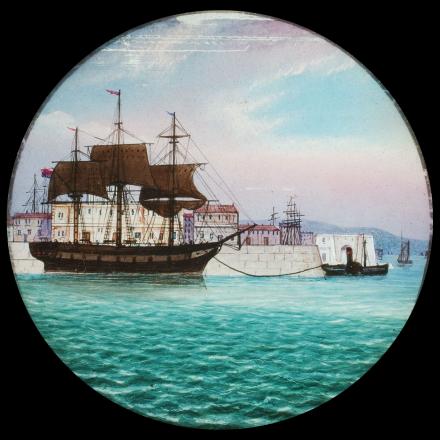 Based on a selection of traditional works (glass picture series, lecture texts), historical apparatus and written sources, the project makes a fundamental contribution to current research approaches in the archeology of the screen and performative consumer media. The indexing and digital edition of archival material that is difficult to access is also aimed at increasing the value and international visibility of relevant German archive holdings on the history of projection art and the screen.

The research project is carried out jointly by the Institute for Media Studies at the Philipps University of Marburg (Prof. Dr. Yvonne Zimmermann) and the Trier Center for Digital Humanities (TCDH) at the University of Trier (Prof. Dr. Claudine Moulin). Senior Researcher at the Philipps University of Marburg is Dr. Ludwig Vogl-Bienek. The case studies developed in Marburg on the performativization of popular knowledge transfer in the three examined dispositifs are published together with selected digital archive editions on the online platform eLaterna - Historical Art of Projection, which was developed by the TCDH in cooperation with the media studies of the University of Trier.

The TCDH Supports with its Expertise

The database of the virtual research environment of eLaterna - Historical Art of Projection is being prepared by the TCDH for the project. The metadata structure developed there is first adopted and adapted as a working basis for data acquisition. On a trial basis, previously determined components of the source corpora are imported into the database.

In order to record diachronic changes in design repertoires, applied techniques, contexts of use and institutional contexts in the three exemplary devices of projection art, the data model of the virtual research environment (FuD) is expanded in cooperation with the media science team. Artifacts and written sources are assigned chronologically and according to design features and linked with commenting text modules to collate performative configurations, contexts of use and institutional contexts.

The data model designed in work phase 2 will be integrated into the virtual research environment FuD (backend). Then the graphic online surface (frontend) of eLaterna is developed with a module for the visualization of the time-related relationships between the collated performative configurations. Artifacts and sources for the visual, linguistic and auditory elements are displayed on a time axis and the network of references to different levels (motifs, performance design, materiality) is visualized and made accessible through interactive options of navigation in conjunction with the associated comments.

The implementation of the graphical user interface is tested using the case studies, and the identified errors are corrected. The collected data is prepared from the virtual research environment for long-term archiving and exported in the form of XML formats.