Document Book on the History of the Germans in Transylvania Online 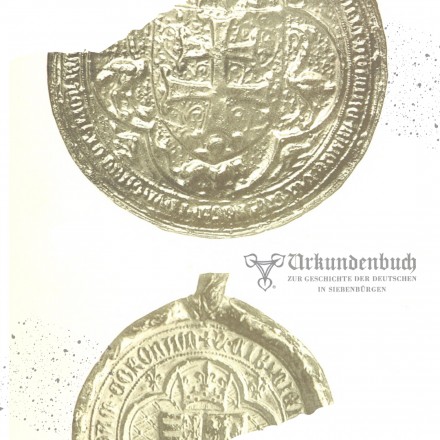 In 1892 the first volume “Urkundenbuch zur Geschichte der Deutschen in Siebenbürgen” was published in Sibiu, edited by the “Committee of the Association for Transylvanian Cultural Studies”.

This marked the beginning of one of the major long-term research projects in the area of ​​regional history in the German settlement areas of East Central Europe. Six more volumes followed, the last in 1991. The editors Dr. Franz Zimmermann, Carl Werner, Dr. Michael Auner, Dr. Georg Müller, Dr. Gustav Gündisch, Dr. Herta Gündisch, Hon.-Prof. Dr. Konrad Gündisch and Gernot Nussbächer made 4687 documents available in printed form. With documents from the years 1191 to 1486, this basic work flourished significantly further than comparable projects in other regions.

So far, however, these texts have only been available in the printed volumes. Not everyone who wants to use them can buy the volumes as second-hand books or lives near an old university or state library. This was remedied by the "Working Group for Transylvanian Cultural Studies" and has long been a special concern of its chairman, Dr. Ulrich Wien .

Thanks to the support of the Federal Commissioner for Culture and the Media, from April 2011 Dr. Martin Armgart at the University of Koblenz-Landau tackled the online position of the document book, supported by Dr. Adinel Dinca in Cluj-Napoca, Thomas Şindilariu M.A. in Kronstadt, Dr. Attila Verók in Szeged and the student assistants Sarah Mai and Johannes Gerstner. Gernot Nussbächer in Kronstadt gave valuable information.

With the help of the “Research Network and Database System” (FuD) jointly developed by the Trier Center for Digital Humanities at the University of Trier, the Collaborative Research Center 600 "Poverty and Strangeness" and the Research Center Europe, a central, network-based database was made available. The scanned document texts and the associated information were imported into this database as data records. Finally, the presentation mask through which you are currently using the data was designed.

In the online version, additions and comments, minor text corrections, changes in dating that have been established in the meantime or suspicions of forgery to the printed document texts can now be noted in the text, instead of escaping some readers in addenda and supplementary publications. The document book can then also be continued in this database. Using various search masks, the content of all documents can be researched across all volumes.

The “Urkundenbuch zur Geschichte der Deutschen in Siebenbürgen online” includes all document texts from volumes I-VII of the printed edition, including the supplements printed there. The documents are already printed across all volumes with a consecutive document book number. As a virtual volume VIII, from No. 4688, texts from the year 1487 are set as a continuation of the document book. Supplements to the first seven volumes are communicated as virtual volume IX, beginning with spring number 9001. The document book numbers of virtual volumes VIII and IX are provisional, as is the Internet address. A later unambiguous addressing, e.g. via URN, is aimed for.

At the beginning of 2012, on the 120th anniversary of the publication of the first volume, this hard work of several generations of document editors can be used much more easily and worldwide.

From March 2012 to the end of 2013, the Federal Commissioner for Culture and Media provided additional funding for the new edition (online) of documents on the history of Germans in Transylvania.