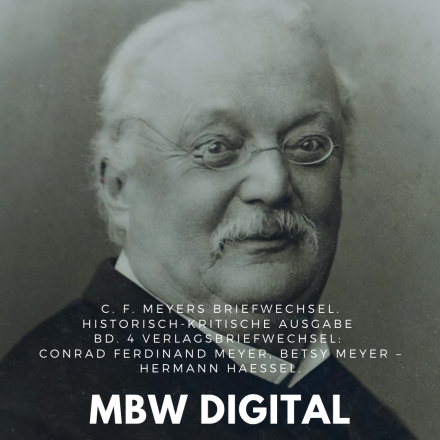 In the SNF project, which has been running since fall 2004 and which is dedicated to the edition of C. F. Meyer's correspondence with his publishers, the TCDH team is involved as a technical research partner. C.F. Meyer's correspondence mainly consists of five individual letters from the period of 1864 to 1901: the correspondence between Meyer and his Leipzig publisher Haessel, between Meyer and his temporary secretary Fritz Meyer and the publisher's correspondence with persons who acted as deputies, agents and assistants to the author, such as Meyer's wife, his secretary and especially his sister Betsy Meyer. The material - a total of about 2500 letters including related documents - is to be published in eight partial volumes (each about 500-600 p.) as vol. 4 of the series C.F. Meyers Briefwechsel. Historisch-kritische Ausgabe (ed. Wolfgang Lukas and † Hans Zeller, Göttingen: Wallstein 2014ff.). Partial volumes 4.1 to 4.4 have been published so far, and the other volumes are scheduled to appear in 2021/2022.

The new, historical-critical edition seeks to satisfy both scholarly demands and the wishes of interested readers. Each volume forms an independent unit and, in addition to the reproduction of the letter texts, offers a document appendix, a text-critical apparatus with explanations, reproductions of selected letters, and various indexes.

The tasks of the TCDH are the data conversion and adaptation as well as the creation of an XML-coded complete register. For this purpose, the existing WORD data of volumes 1 - 3 will be converted to XML according to a TEI-compliant schema developed for this project. The parts of volume 4 that are already available in XML format must also be adapted with regard to the common XML schema and re-designated in some places for the purpose of standardization.

In addition, a complete register will be created from all volumes, containing persons and works, places as well as periodicals. This also requires a prior conversion of the partial registers.