From cosmic-divine order to museum collection? A master narrative as an order of knowledge

Lecture in the context of the conference "Arranging and Disentangling Knowledge - from Analog to Digital Europe?" 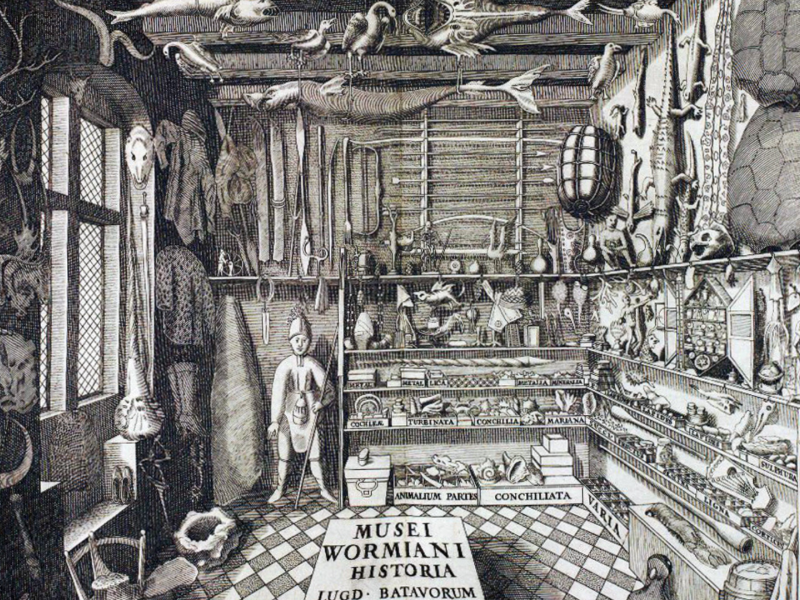 The conference is aimed at a scientifically interested professional audience. If you are interested, please send an e-mail to info [at] ieg-mainz.de.

Leibniz-Institut für Europäische Geschichte (IEG) - Programm (pdf)
Ole Worm's cabinet of curiosities, from Museum Wormianum, 1655. Original source from: Smithsonian Institution Libraries. Original image is from 17th century, so is public domain in US and probably everywhere else.
Lecture by Dr. Joëlle Weis on 16.3.2022 in the context of the conference "Arranging and Unbordering Knowledge - from Analog to Digital Europe?".

In keeping with the spirit of the “Wunderkammern” and their claim to depict the world “in miniature”, the study of collections is ideally suited to observe different knowledge systems and their negotiation in a compressed way. Historical research on collections examines how knowledge systems emerge, establish themselves, and change: collections as such change their composition and function over the centuries; looking at individual objects shows how they can take on very different meanings depending on time, place, and context.

But the history of the museum as we mostly tell it today - from private and exclusive cabinet of curiosities to public place of social relevance - is also, on another level, a perfect case study for a discussion of knowledge orders and their functions. The narrative contrasting pre-modern object-collections with supposedly modern and orderly forms of collecting appeared as early as the 18th century and was closely tied to notions of enlightenment and rationality. This was accompanied by a double differentiation from one's own predecessors and non-European cultures, which was reinforced in the 19th century by the instrumentalization of collections in terms of nation-building. Although the narrative of such a linear development of collections has been questioned sporadically in recent years, the perspective persists in collection studies. The lecture will also analyze the discourse about this order and explore the question of the extent to which this kind of master narrative is a distinct form of knowledge order, which in itself is an essential building block of European self-assurance. Furthermore, I will discuss how especially in current debates on collection theory and especially against the background of postcolonial theories our narrative is questioned. This is further reinforced by new and innovative forms of (digital) presentation of bodies of knowledge. We are becoming increasingly aware of how the supposedly universal order of knowledge creates difference, which ultimately also fundamentally shakes up the European self-image.