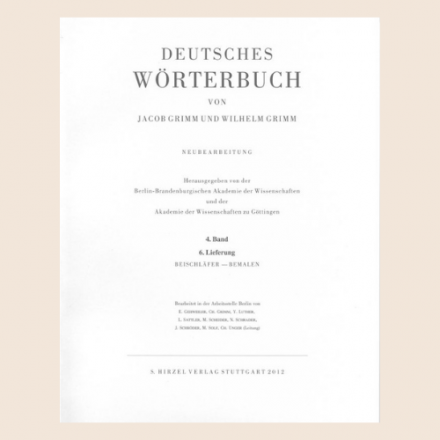 Website of the Project: DWDS – Digital dictionary of the German language

The revision of the German dictionary by Jacob and Wilhelm Grimm emerged from over forty years of lexicographical work and replaces the oldest, only historically interesting articles from the first revision in areas A to F. The more information containing articles of the revision are mostly ignored, because they have not been digitally published yet. The aim of the project was the (retro) digitization and electronic publication of the revision, its networking with the initial processing as well as the integration into the Trier dictionary network, the digital dictionary of the German language and the digital platform of the Academy of Sciences in Göttingen. The annotation of the full text according to the guidelines of the TEI now enables new lexicographical and metalexicographical evaluations, the reference structure was made usable by linking with dictionaries and documentary texts.

In order to facilitate access to this important dictionary, the TCDH digitized the ¹DWB between 1998 and 2003 as part of the project Das Deutsche Wörterbuch von Jacob und Wilhelm Grimm on CD-ROM and on the Internet. The ²DWB was digitized in full text, annotated in XML in accordance with the international TEI standards taking into account OAI conformity. Finally, ¹DWB and ²DWB were networked with each other at the keyword level, and the ²DWB was linked to the other dictionaries in the Trier dictionary network and in the DWDS according to established procedures and integrated into the digital platform of the Göttingen Academy of Sciences.