As part of a Short Term Scientific Mission of the COST Action IS1305: European Network of e-Lexicography (ENeL), the Trier Center for Digital Humanities hosted the young scientist Gerbrich de Jong from the Fryske Akademy in Leeuwarden, Netherlands, and supported scientific mobility and academic exchange.

Goal of the COST Action IS1305: European Network of e-Lexicography (ENeL) is the establishment of a European network of lexicographers. In four working groups, the participating researchers are looking for ways to facilitate access to scientific dictionaries, to develop common approaches in the field of e-lexicography and to establish a broad and systematic exchange of experiences and common standards and solutions. So-called Short Term Scientific Missions that are possible as part of the action help to further expand these networks, in particular by young scientists in institutions in other COST countries getting to know new technologies or using instruments and methods that are not available at their home institution.

As an ENeL member and employee of the Fryske Akademy, Gerbrich de Jong is primarily associated with working group 1 “Integrated Interface to European Dictionary Content” and makes an essential contribution by setting up an overview of academic online dictionaries for official languages ​​in Europe for the purpose of this group. During a four-week research stay at the Trier Center for Digital Humanities (TCDH), where scientific dictionaries have been retro-digitized and networked for more than 16 years, she gained valuable insights into working methods and methods in the field of digital lexicography. She was supported in her research by TCDH employee Ursula Schultze, who added printed dictionaries for individual languages ​​to the compiled inventory if they were not yet available online. In this way, gaps in the digital dictionary landscape were mapped and a goal of working group 2 “Retro-Digitized Dictionaries” was met. With a view to working group 4 “Lexicography and Lexicology from a Pan-European Perspective”, etymological dictionaries were also listed. The joint work and the consideration of the respective interests not only benefited the participating institutions, but also the networking of the working groups was decisively promoted.

At the first ENeL workshop in Bled (Slovenia) on September 29th and 30th In 2014 Gerbrich de Jong presented the results of their work. 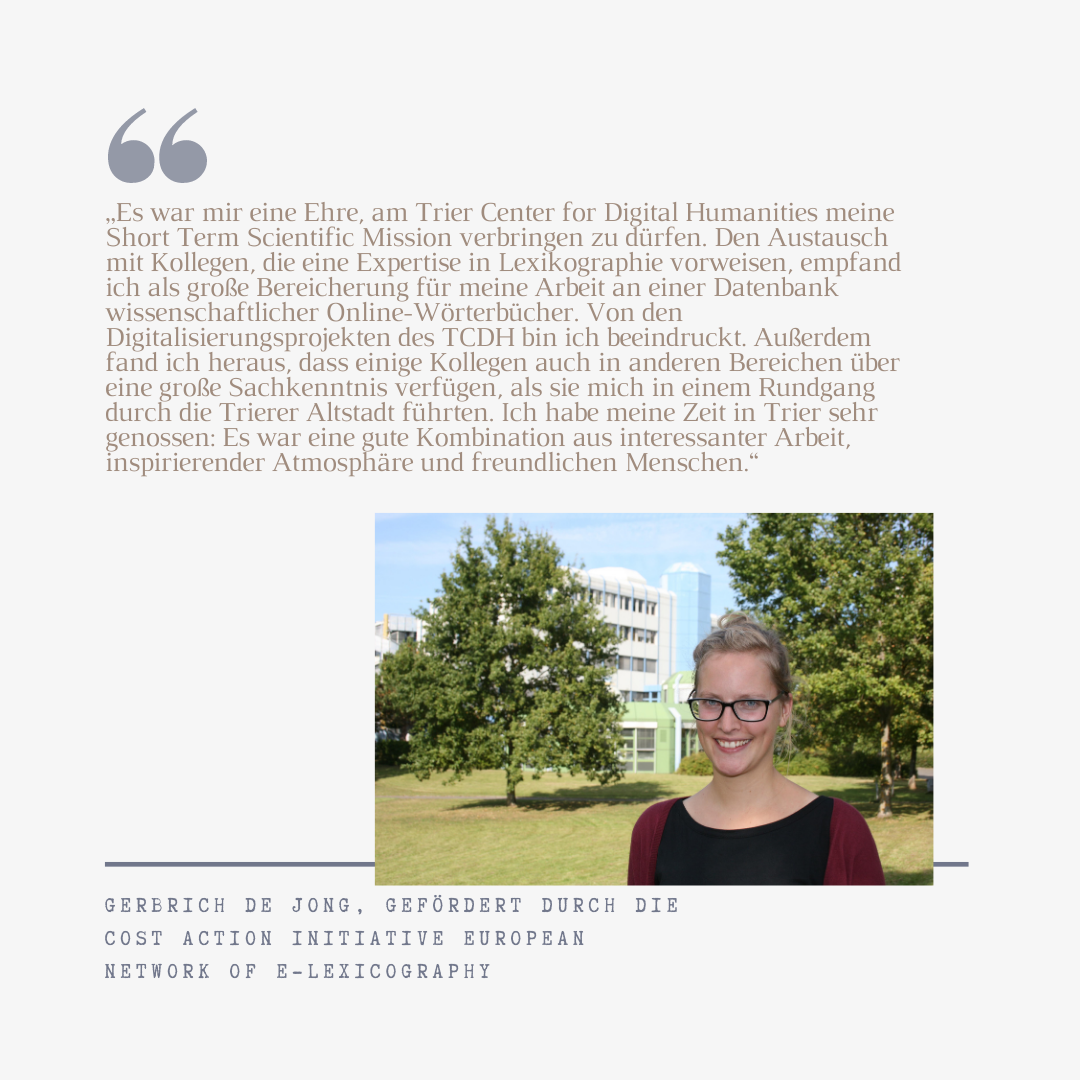 September 2014: STSM at the Trier Center for Digital Humanities, Germany