Performances with the Laterna Magica 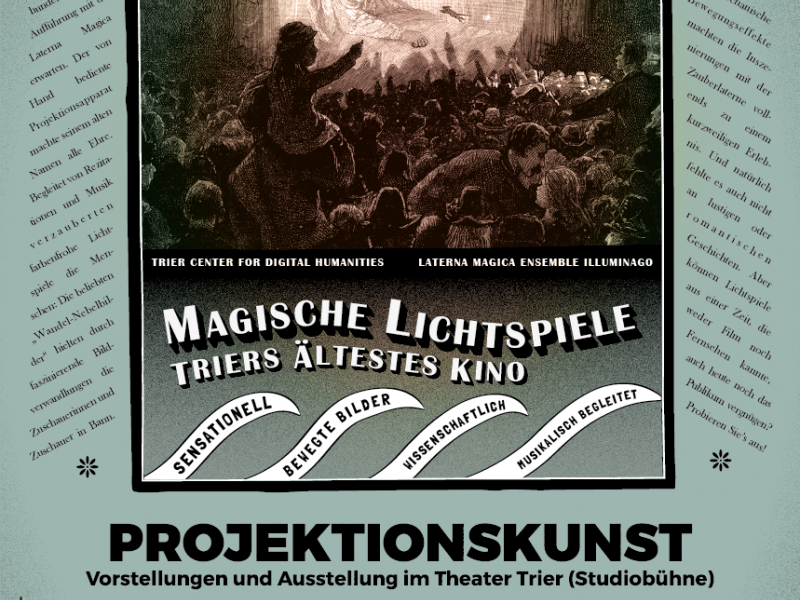 Event
The art of projection was a mass medium in the 19th century and is considered the forerunner of modern film. Since 2013, this cultural-technical phenomenon has been investigated in a cooperation project by the Trier Center for Digital Humanities (TCDH). As part of the City City Campus trifft Illuminale event on September 30, 2016, the TCDH will present the project in the Theater Trier and, together with the Ensemble Illuminago, invite you to performances and workshops with historical projection equipment.

The Laterna Magica (magic lantern) is basically an antique projector. 150 years ago, pictures were thrown onto the canvas with the help of light and painted or printed glass plates. Moving pictures were created by fading in and out as well as other mechanical devices. In addition, texts were mostly read out and live music played, so that whole stories were told during the performances. Today the art of projection has been almost completely forgotten. But in Trier's oldest cinema, visitors can immerse themselves in media history and experience authentic performances with a historical Laterna Magica.

4:00 p.m. Family program with workshop After a short introduction to the historical art of projection by Dr Thomas Burch (TCDH) and Dr Ludwig Maria Vogl-Bienek (University of Trier) is followed by a 20-minute performance with the magic lantern. Afterwards, interested families have the opportunity to take a closer look at the historical projection equipment and to come with the Illuminago ensemble and the scientists. Children from the age of 9 can have their own pictures illuminated in a workshop with toy lanterns and think up stories that are then presented to their parents and siblings.

8:00 p.m. & 10:00 p.m. evening program with hands-on session In the evening too, the artists and researchers will be happy to answer questions from the audience after the introductions and demonstrations. If you feel like it, you can also try your hand at being a projection artist in the hands-on workshop and try out numerous optical devices.

Further information Admission is always 15 minutes before the start of the performance. Please note that the number of participants is limited due to the space. First come, first serve! The studio is not open to through traffic during the performances.
In the studio of the theater, the TCDH will set up a stand for the research project Medienhistorische, methodische und medientechnische Grundlagen der Digitalisierung von Werken der historischen Projektionskunst.

Involved
Trier Center for Digital Humanities (TCDH) As a research facility of the University of Trier, the TCDH is one of the oldest and leading centers for digital humanities in Germany. Since 2013 it has been working with the local chair for media studies under the direction of Prof. Dr. Martin Loiperdinger on the project Medienhistorische, methodische und medientechnische Grundlagen der Digitalisierung von Werken der historischen Projektionskunst.

The project explores the works of historical projection art of the 19th century, which, despite its earlier popularity, went largely unnoticed by science. The aim is to digitize the surviving works and make them permanently accessible on the Internet. For this purpose, the works are recorded and reconstructed in their chronological order, sources are collected, processes for image and sound recording and reproduction are developed.

More information at. Ensemble Illuminago Karin Bienek and Dr Ludwig Maria Vogl-Bienek have been performing as a projection artist for three decades and, in addition to demonstrations with the Laterna Magica, also offer seminars and presentations on media history. Just recently, Dr Ludwig Maria Vogl-Bienek, who works as a media scientist at the University of Trier, has published his new book "Lichtspiele im Schatten der Armut. Historical projection art and social issues".

The ensemble will be supported on September 30, 2016 by Mervyn Bienek (production assistant), Judith Herrmann (musical design on the piano) and Dina Keller-Metje (freelance director) and Sarah Woike.